Few activities bring down social barriers and build character better than sports. Through a variety of applications, coaches can utilize the avenue of sports to develop relationships, enrich communities, and transform society.

Last month Coach Joe* and his teen son Jr* met up with a team of like-minded sports experts to provide youth sports camps for refugee kids recently displaced from their homes. The multinational staff arrived a couple days early for team meetings which included planning logistics for the camps, encouraging the kids, running through the team games, and coordinating the team to welcome 400 kids the following week.

The camp was held at a school which had basketball courts onsite and soccer fields a couple kilometers away. The school, located just outside a major metropolitan area of over a million people, is an international school. About 400 total kids, ages 4 to 15, participated in the camps over 6 days. 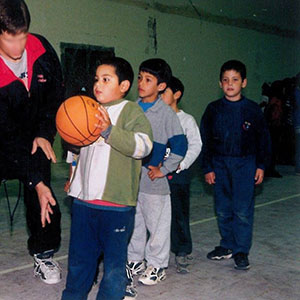 The kids were divided by gender and the boys played soccer and the girls played basketball. Initially, the staff was going to rotate them so the kids could play both sports, but due to time constraints and logistics, they choose not to do that.

Coach Joe gave leadership to the basketball camp as the head clinician. Together with his son Jr, they planned and implemented all the skill stations, competitions, and basketball games. They also taught team building exercises. Jr commented that the kids were all smiles all the time! He enjoyed recognizing the player of the day. It was a great learning experience for Jr to not only plan, but also execute and adjust as the week progressed. Coach Joe was able to communicate in a limited way with his dialect of the local language, and English was understood by some as well. He was again thankful that the language of sports is universal.

Jr shared with us about a little girl who was so happy, and full of smiles starting with the first day. She loved the games. They shared no common language, but she was such a fun little girl to be around and Jr taught her a secret handshake and they mutually blessed each other by doing it throughout her two days at camp. He prayed for her and still talks about her.

*Real names, photos, locations are not used for security reasons.